In terms of results, Liverpool have been perfect in the Premier League this season.

They’ve won eight out of eight matches so far but they were made to sweat by Leicester last weekend as they edged to a 2-1 win at Anfield.

James Milner’s stoppage-time penalty secured the three points for the Reds after James Maddison had cancelled out Sadio Mane’s opener.

The result was made all the more significant when Liverpool’s title rivals Manchester City suffered a shock defeat at home to Wolves thanks to a second half double from Adama Traore.

City have now lost twice in the league and they are eight points behind the leaders – something Pep Guardiola has in the past been fearful of.

And with this, British bookmakers have unanimously slashed the odds on Jurgen Klopp’s men winning the Premier League.

Their odds to win a first ever Premier League crown and first English title since 1990 have been cut from 6/5 to 8/11, according to Oddschecker.

This means reigning champions City have slipped down the pecking order, drifting from 8/15 out to the best price of 6/4.

It is understood Liverpool and City are the main contenders for the title this season but a new third favourite has also entered the mix.

After leapfrogging Tottenham and Chelsea, Arsenal are third favourites although they are priced at 125/1 to topple Liverpool and City’s stranglehold on the table.

Below you can see a table of the favourites to win the Premier League this season. 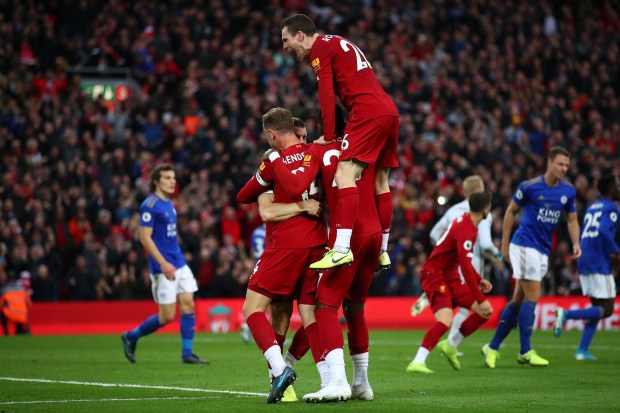 Punters have acted on the events of the weekend with a whopping 74 per cent of all bets in the last 24 hours backing Liverpool.


Allardyce defends Klopp over ‘arrogance’ claims but admits: ‘Jordan has got a point’


Everton or Leeds? Sam Allardyce decides which club are bigger

Meanwhile, 18 per cent of all bets in the market are backing Pep Guardiola’s side.

The remaining bets spread over Chelsea (six per cent) and Arsenal (two per cent).

Oddschecker spokesperson Callum Wilson said: “The mood in Manchester at the moment is a solemn one, with the red half more likely to be relegated (125/1) than win the league (750/1) and the blue half dropping points for the third time already this season.

“Although all is rosy on Merseyside, with Liverpool continuing to go from strength to strength, and rewarding the 54 per cent of punters who backed them to win the league in the pre-season.

“Despite City being favourites pre-season, Liverpool gathered far more attention from Oddschcecker punters, who will be watching the title race with great interest.”

Copyright © 2020 | by footballnote and publishers